Walter Schnepel founded the Bremen lamp manufacturing company TECNOLUMEN in 1980. In an interview, he speaks about the Bauhaus idea, a spontaneous visit to Wilhelm Wagenfeld, and the appeal found in designing things yourself.

You came to Bauhaus through art. As an art collector, you initially started with Classical Modernism paintings and subsequently went on to purchase mainly Fluxus works – what parallels do you see between Bauhaus and Fluxus?

That is difficult. I would say delete the question, because it’s not possible to explain everything. In general, we only ever know this geometric Bauhaus school style, but that’s not the whole story, because Bauhaus also had its expressionists. Take Paul Klee, for example. In which category would you sort him? We always measure the school by the results in architecture and design. However, in combination with art you have to take on a different perspective. You will find artists who have worked quite differently, expressionistically, with almost surreal works.

Even Gyula Pap’s work was expressionist later on. The visual artists at the Bauhaus school are not only abstract or “hard edge”, as the English call it. Only Kandinski and Moholy consistently painted abstractly. I recently discovered Paul Klee and Hans Arp in a Swiss exhibition on surrealism. There are amazing connections.

Bauhaus and Fluxus share the common idea of moving away from decoration. If you are searching for a concrete connection, intellectual spirituality could be mentioned as one. At the beginning of the Bauhaus school, the parallel DADA movement, as found in Zurich, existed, and it naturally also had its influence on Bauhaus artists. Fluxus, on the other hand, has its roots in DADA art. It emerged from both concrete and abstract poetry. Fluxus is still not a descendent of the Bauhaus school, but just as widespread, because there are expressionistic and, in part literary, works. Kurt Schwitters and, if you wish, even Christian Morgenstern and Bauhaus; everything is so closely interlinked that it’s basically impossible to answer the question unequivocally. And yet you can find a small reference to the connections, an artist who always carried the whole thing from the OWPNs up to Fluxus: Marcel Duchamp. He made a great deal of concrete, but also surrealist art. In this respect, I consider Bauhaus and Fluxus not to be so far apart from one another. 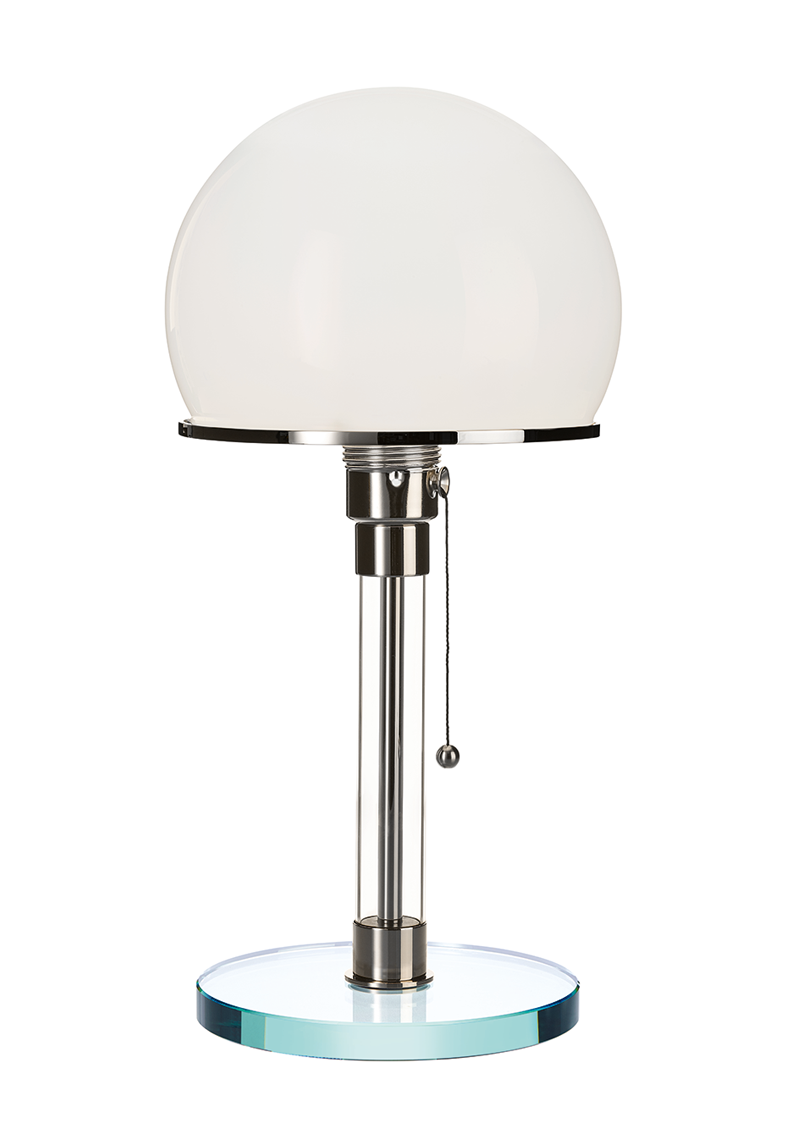 You once said: “Art, design and music are media for communication, not a language that can be logically learnt or even translated”. Does the idea of the Bauhaus school, with its credo of “form follows function” oppose this? Does it in fact promote this intellectual confrontation?

Yes and no. Even those designers who were formative for Bauhaus, appreciated artefacts by unknown craftsmen, such as everyday objects found in rural culture. These objects also satisfy the credo of “form follows function”, yet without any intellectual aspiration. For me, art is a means of communication that cannot be translated. You have to imbibe art holistically, with emotional intelligence. When I was a little younger, I worked for TECNOLUMEN out in the field. Whenever I was shown a plagiarism, I said: “Put our lamp next to it.” If the customer sees and understands it, he will buy our lamp. If he doesn’t see it, we hope he will become happy with his plagiarism. That worked. It cannot be explained. It’s about proportions, about something abstract – you have to feel it. You don’t even have to know what’s right or wrong with the object. Insignificant designs are also found among the Bauhaus workpieces, although they supposedly follow the rules. It becomes particularly clear in those small goldsmith’s works. For me, Marianne Brandt is a great artist in this field. She has designed things that I consider to be highly emotional. Of course, there are explanations about the pieces, the material used and the form, but these explanations were certainly provided afterwards.

“I could not live without art. I must have it around me. I cannot explain it.”

Can Bauhaus be found in your company?

Hard to say. Some employees have understood what our workpieces are all about, and it’s definitely visible through the furnishings and products. You can feel Bauhaus if you want to. With “Young Designers”, it is our gut feeling that decides whether or not we want to include their designs in our program. We always have the entire collection in mind. This way, the new designs harmoniously fit into the existing collection.

It was not Bauhaus, but woodcuts that drew your attention to Wilhelm Wagenfeld in 1976. What inspired you about these pictures at that time?

I discovered these expressionistic woodcuts by chance in an archive in Worpswede. At first I was surprised, because I only knew Wilhelm Wagenfeld’s later works and his designs for Lindner. I then spontaneously visited him in Stuttgart and we talked for a long time, whereby he dismissed the early woodcuts as a “youthful indiscretion”. I can only remark: an adroit “youthful indiscretion”. He had a few more, too. Some I eventually bought, because I believe they belong to the complete works of Wilhelm Wagenfeld.

Bauhaus was a school and conveyed not only the creative aspects but also a certain idea of looking at the world. Do you see Bauhaus as a kind of philosophy of life, the spirit of which can still be conveyed today?

In some ways, yes. It is difficult to say, because they are grey areas. Many appreciate the Bauhaus design, own a Wagenfeld lamp and have furnished their home accordingly. When I walk through antique shops in Budapest, every square cupboard there is assigned to Bauhaus, although the “square” alone says nothing at all. And yet, very few people know that Bauhaus was a school. There are excellent buildings designed by Hungarian Bauhaus architects, an entire street in Budapest, the napraforgó utca (Sunflower Street). This, for example, arose slightly later than Bauhaus, in the early 1940s. However, the way in which these buildings were renovated, does not correspond to the Bauhaus spirit. Today, Bauhaus serves as a role model for many. You don’t have to do things the same way, but you can learn from it. You can’t learn it schematically; you have to feel it. There never were any real rules anyway. Dieter Rams, for example, did not learn at the Bauhaus school, he nevertheless captured its
spirit. His designs came from the Bauhaus idea. 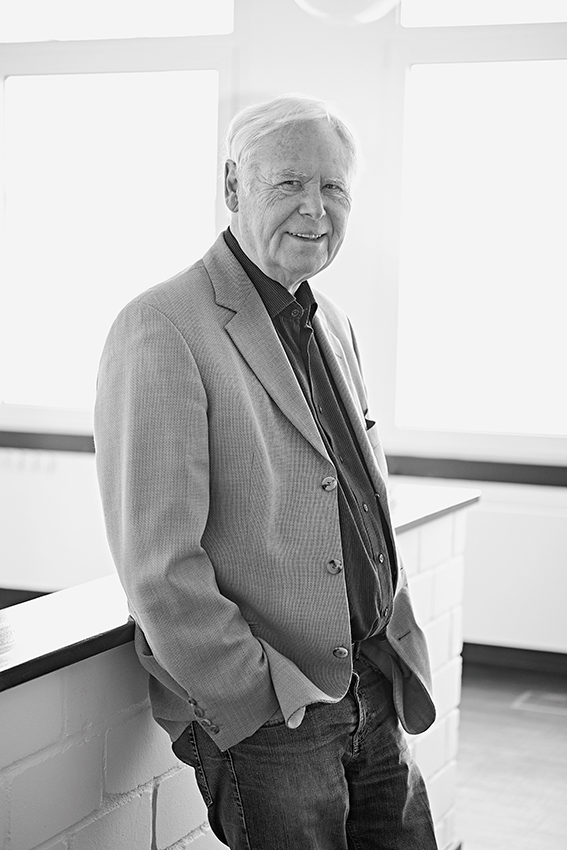 The initial production and distribution of WA 24 was not easy. Material broke or couldn’t be used, and no furniture store was interested in this cool design. Nevertheless, you sold the already produced 250 pieces within three weeks. Were you always convinced of the success?

Yes. An anecdote: In a telephone conversation with my wife, who was still living in Sweden at the time, I asked for the address of the Arts and Crafts Museum in Gothenburg in order to send a publicity flyer there. I was convinced that this museum would buy a lamp. And, after a few days, I received the order for a lamp from the Röhsska Museum in Gothenburg. Naturally, such a project is based on the conviction that it will be a success.

Copies and counterfeits are an issue that has accompanied you since the late 1980s. Is it still a nuisance?

The situation has not improved and has become even more complex owing to the possibilities provided by the Internet. Putting a stop to this is hard. In other countries, different legal frameworks apply. One can only hope that people will be able to distinguish between the original and a plagiarism.

With your company TECNOLUMEN, you don’t only sell the famous Wilhelm-Wagenfeld lamp, you have also designed lamps yourself – what attracts you, personally, to design your own objects?

There was something missing in our collection at that time, and we wanted to extend our offer. Hence, we designed the lamps with fabric shades. Of course we could have commissioned someone. But by designing it ourselves, we were able to use what was already there. Some designers have no idea of the technology and therefore do not know what is possible. In addition, the idea of applying what I had learnt through my intensive involvement with Bauhaus designs and to create something of my own appealed to me. Design has something to do with emotions. And if you use the golden ratio, nothing can go wrong.

There have been changes in the technical field: the good old incandescent lamp has been replaced by more efficient LED light sources. What has changed for the lamps as a result?

Nothing has changed in the Bauhaus lamp’s design. In new designs, the current technical possibilities are integrated into the design.

Speaking of changes: With a view to the current design and furnishing style, does the Wagenfeld lamp fit into today’s living rooms?

It always fits in well-furnished homes, even though I think that furnishing trends are artificially produced today. Presently, it has to be expensive, yet look shabby – absurd. It’s the same with contemporary art. Many things are very strained. One thing I observe with great regret is that we have fewer and fewer furniture stores. Meanwhile, people are buying on the Internet.